The following article by Sinead Brophy of Swansea University was originally published by The Conversation.

Struggling to keep up. SpeedKingz/Shutterstock

Millions of people all over the world are experiencing mental health problems. And though the causes vary, we know that half of all these illnesses will have started in childhood or the teenage years.

In the UK, referrals for and reports of teenagers with depression and anxiety and other mental issues have risen significantly in recent decades – reportedly increasing by 70% in the 25 years to 2016.

Researchers have known for many years that education and mental health are strongly linked and that doing well in school gives children a strong sense of feeling good about themselves – which in turn is linked to higher levels of well-being in adulthood.

Depression, on the other hand, is linked to poor future academic success, and this link between depression and school failure is stronger for girls than for boys.

We looked at the education and health records (consisting of GP and hospital admission files) from more than 600,000 children from across Wales, and at their school test results. These children were aged between 11 and 18, so that we were looking just at teenage mental health. And they were born or living in Wales between 1990 and 2014.

Looking at these records, we found that children who “declined” in school were more likely to be depressed as a teenager. The children were identified as doing well in school at age seven, but after that were not meeting their key stage milestones in reading, writing and numeracy. So, by age 11, they were not achieving well – or “declining”. During their teenage years, they were then diagnosed with depression. 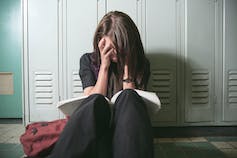 In addition, we found that seven per cent of all girls and three per cent of all boys were treated or diagnosed with depression by age 19. That is 33,500 children just from these records that were treated for depression. Not only is this difficult for the individuals and families involved, but can be a great cost to the NHS, too.

Our study has important implications which suggest that depression symptoms may be being missed in primary school children, and that support for emotional and social development in primary school could improve and reduce future mental health problems.

There is also a case for more support for teachers and families in helping children understand emotions and dealing with difficulties. Parenting skills, supportive school environments and community programmes may be more cost effective for the NHS as well, and prevent the young people ever having to experience a mental health problem.