Meet the new ‘renewable superpowers’: nations that boss the materials used for wind and solar

Imagine a world where every country has not only complied with the Paris climate agreement but has moved away from fossil fuels entirely. How would such a change affect global politics?

The 20th century was dominated by coal, oil and natural gas, but a shift to zero-emission energy generation and transport means a new set of elements will become key. Solar energy, for instance, still primarily uses silicon technology, for which the major raw material is the rock quartzite. Lithium represents the key limiting resource for most batteries – while rare earth metals, in particular “lanthanides” such as neodymium, are required for the magnets in wind turbine generators. Copper is the conductor of choice for wind power, being used in the generator windings, power cables, transformers and inverters.

In considering this future it is necessary to understand who wins and loses by a switch from carbon to silicon, copper, lithium, and rare earth metals.

The countries which dominate the production of fossil fuels will mostly be familiar:

The list of countries that would become the new “renewables superpowers” contains some familiar names, but also a few wild cards. The largest reserves of quartzite (for silicon production) are found in China, the US, and Russia – but also Brazil and Norway. The US and China are also major sources of copper, although their reserves are decreasing, which has pushed Chile, Peru, Congo and Indonesia to the fore.

Chile also has, by far, the largest reserves of lithium, ahead of China, Argentina and Australia. Factoring in lower-grade “resources” – which can’t yet be extracted – bumps Bolivia and the US onto the list. Finally, rare earth resources are greatest in China, Russia, Brazil – and Vietnam. 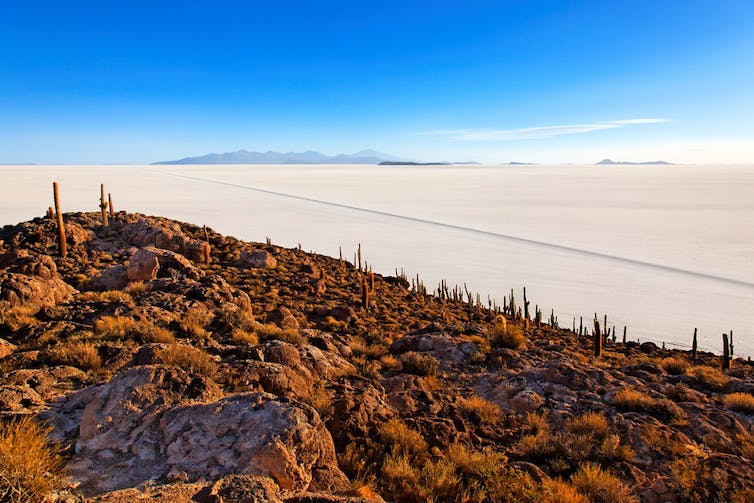 Of all the fossil fuel producing countries, it is the US, China, Russia and Canada that could most easily transition to green energy resources. In fact it is ironic that the US, perhaps the country most politically resistant to change, might be the least affected as far as raw materials are concerned. But it is important to note that a completely new set of countries will also find their natural resources are in high demand.

An OPEC for renewables?

The Organization of the Petroleum Exporting Countries (OPEC) is a group of 14 nations that together contain almost half the world’s oil production and most of its reserves. It is possible that a related group could be created for the major producers of renewable energy raw materials, shifting power away from the Middle East and towards central Africa and, especially, South America.

This is unlikely to happen peacefully. Control of oilfields was a driver behind many 20th-century conflicts and, going back further, European colonisation was driven by a desire for new sources of food, raw materials, minerals and – later – oil. The switch to renewable energy may cause something similar. As a new group of elements become valuable for turbines, solar panels or batteries, rich countries may ensure they have secure supplies through a new era of colonisation.

China has already started what may be termed “economic colonisation”, setting up major trade agreements to ensure raw material supply. In the past decade it has made a massive investment in African mining, while more recent agreements with countries such as Peru and Chile have spread Beijing’s economic influence in South America.

Or a new era of colonisation?

Given this background, two versions of the future can be envisaged. The first possibility is the evolution of a new OPEC-style organisation with the power to control vital resources including silicon, copper, lithium, and lanthanides. The second possibility involves 21st-century colonisation of developing countries, creating super-economies. In both futures there is the possibility that rival nations could cut off access to vital renewable energy resources, just as major oil and gas producers have done in the past.

On the positive side there is a significant difference between fossil fuels and the chemical elements needed for green energy. Oil and gas are consumable commodities. Once a natural gas power station is built, it must have a continuous supply of gas or it stops generating. Similarly, petrol-powered cars require a continued supply of crude oil to keep running.

In contrast, once a wind farm is built, electricity generation is only dependent on the wind (which won’t stop blowing any time soon) and there is no continuous need for neodymium for the magnets or copper for the generator windings. In other words solar, wind, and wave power require a one-off purchase in order to ensure long-term secure energy generation.

The shorter lifetime of cars and electronic devices means that there is an ongoing demand for lithium. Improved recycling processes would potentially overcome this continued need. Thus, once the infrastructure is in place access to coal, oil or gas can be denied, but you can’t shut off the sun or wind. It is on this basis that the US Department of Defense sees green energy as key to national security.

A country that creates green energy infrastructure, before political and economic control shifts to a new group of “world powers”, will ensure it is less susceptible to future influence or to being held hostage by a lithium or copper giant. But late adopters will find their strategy comes at a high price. Finally, it will be important for countries with resources not to sell themselves cheaply to the first bidder in the hope of making quick money – because, as the major oil producers will find out over the next decades, nothing lasts forever.